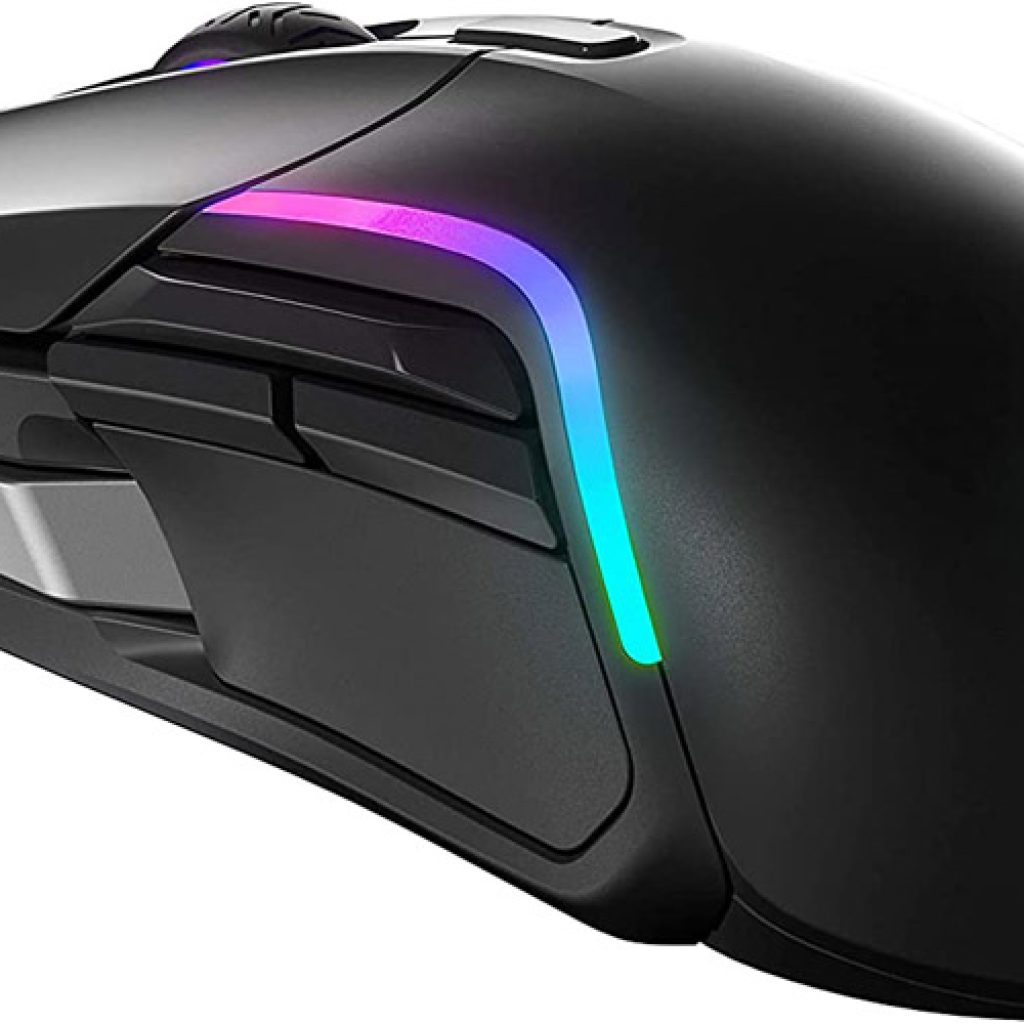 Today we’re going to take a look at the Rival 5 gaming mouse by SteelSeries. This is a newer gaming mouse that sits somewhere in the middle of the SteelSeries catalog when it comes to features and pricing — placing it someplace between the Rival 310 and Rival 600 series of mice.

This mouse has a matte-texture-finish along the plastic body, lighting trim flanks the palm rest, and a lighted logo can be seen on the rear of the mouse. It has a braided USB cord.

One thing to keep in mind, this is not an update to the Rival 500. The Rival 500 is a discontinued MMO-style mouse that had a larger number of configurable buttons and a shorter and wider form factor. Other than sharing a similar naming convention, this newer Rival 5 appears to be a mouse of its own. Geared more toward FPS style gameplay and those seeking fewer buttons in a more traditional SteelSeries form factor — that more closely resembles the Rival 600.

Let’s take a closer look into that form factor

The body of the mouse is black with silver trim, has a long slender build with a lower profile and a natural feel for a 3 finger placement on the grip: middle, pointer, thumb.

This mouse is dubbed by SteelSeries as a “multi-genre” mouse, and utilizing the SteelSeries engine software, all of the buttons are easily reconfigurable.

Alright, so let’s get into the subjective arena: ‘How did the mouse feel to us during use?’ Let’s start with the tracking, because if that isn’t performing properly then the rest of the mouse is just a big chunk of plastic.

WHO IS THIS MOUSE BEST GEARED TOWARD?

Most likely palm grippers—because claw grippers and tip grippers may find only one of the thumb buttons to be seamlessly usable, while the top left and right click buttons may prove to be too far forward for these grip styles to comfortably make effective contact over a longer period of use.

So it may create quite a bit of fatigue for claw or finger tip grippers. That’s why palm grippers may do best. Maybe medium–. It’s hard to say what hand size would do best because, well, if you had a larger hand you might be able to reach that silver-colored thumb button more easily — so you might be able to get some use out of that once in a while. But, if you had a larger thumb you’re going to have a harder time articulating the two depressible buttons underneath the flick switch — where a smaller thumb would come in handy and be able to get up and under that flick-switch; to maybe get some articulation on those switches.

It’s a quirky enough mouse that — if you’re considering this mouse — it may be best to get it locally or some place with free returns so you can return it if you’re not happy with it. Because it’s going to take a particular person to get a good fit on this mouse: a particular personality; certain bio-mechanics; specific ergonomic expectations — that it just happens to sync with their gameplay, somehow, and they’re going to invest the time to commit this button configuration to muscle memory so that they can make it work better for their purposes.

Overall, the suggestion would be: get it somewhere that has either free return labels, or is local—where you can just jump back up to the store and return it if you’re not happy with it.

NOT A RIVAL 500 REPLACEMENT 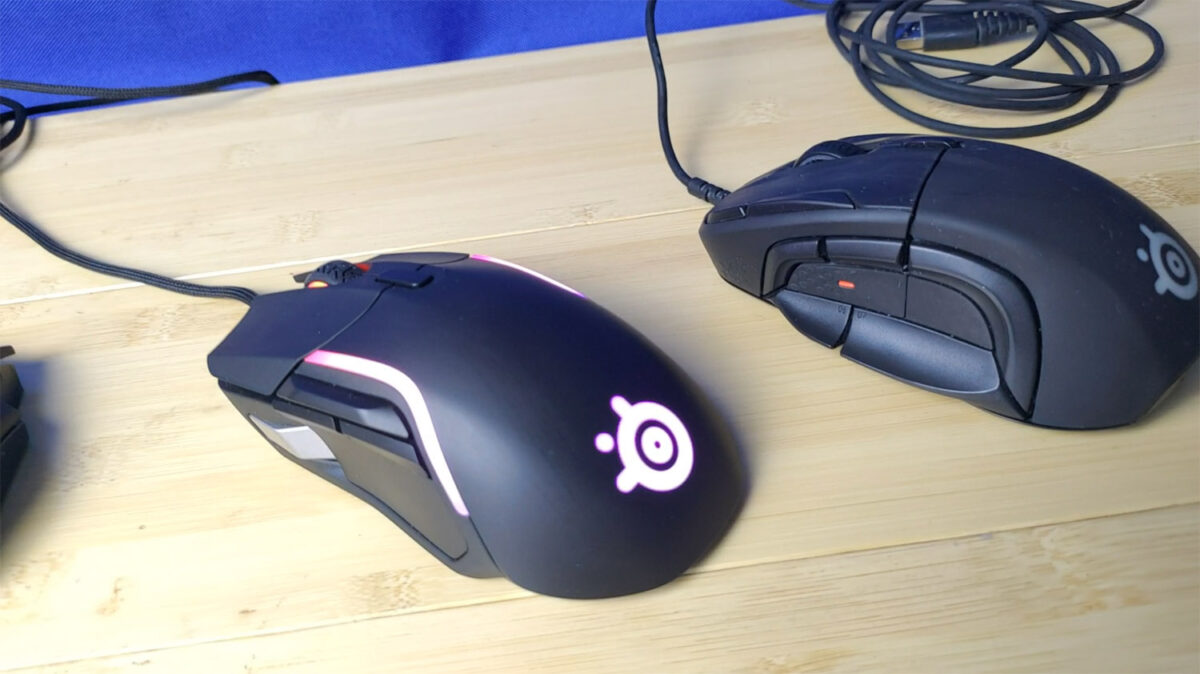 One other important takeaway to remember, this is not an update to the Rival 500. This is a completely different mouse—even though it has the Rival 5 in its name, it’s a completely different mouse. For something similar to the Rival 500, you may instead want to check out something like the EVGA X15. Even though it’s not identical, we’ve been testing that mouse and it’s been showing some promise as a Rival 500 replacement option. We’ll try to do a review on that mouse next.

SteelSeries claims on the box that this mouse has “onboard memory,” but it does appear to be partially dependent on the Windows-based SteelSeries Engine software running in the background. When setting a custom configuration profile from within Windows, followed by booting directly into a Linux environment on the same system, the configuration appears to remain active. However, if the USB cable of the mouse is unplugged, and then reattached to the system, once booted into the Linux desktop (or when moving the mouse to a different system), the configuration reverts back to the manufacturer’s default lighting and button behavior. This is odd, because in the SteelSeries engine we even changed the profile labeled as ‘default’, then saved that to the device, so the default profile saved to the device should have been overwritten with our specific settings.

Though this seemed to have no affect on the embedded default profile, within the mouse, once it was unplugged and then re-plugged into the system (or moved to a different system). Whether this is something that can be remedied with a future firmware update remains to be seen. Just keep in mind that at this time the SteelSeries Engine does not appear to save the full configuration to the mouse — or if it does, it is lost once the USB cable is unplugged from the system. It instead appears to be saving a profile configuration identifier that is then polled from the SteelSeries engine software, running in the background, and if that software is not running (like within Linux) then the mouse reverts back to manufacturer defaults once the USB cable is unplugged from the system. Odd behavior for sure, so hopefully SteelSeries is able to remedy this with a future update.

But yeah, the Rival 5 gaming mouse by SteelSeries—placing it someplace between the Rival 310 and Rival 600.

But, I think if you’re happy with either one of those mice then this mouse is not going to be something that’s going to change the game.

And that flick-switch—. We’re not new to flick-switches, because the Rival 500 had a couple of flick-switches, as well, but they were placed at the bottom of the thumb rest and it was just a downward flick action, so one of those was a little more usable than the ones we have found on the Rival 5. The Rival 5, during intense in-game action, the flick-switch just wasn’t really usable for us, except for maybe downward—if we really forced it, because that upward pressure on the switch just requires enough force that it lifts the mouse off the pad. Just enough force to interrupt tracking; millisecond here, millisecond there — resulting in losing out on exchanges while trying to activate that flick-switch during those intense interactions in the game. Just enough to keep coming out with the short-end-of-the-stick.

The Rival 5 gaming mouse…that may just fit somebody out there, somewhere.

DO YOU CURRENTLY OWN THIS MOUSE?
Are you loving it? Are you not loving it? Have you found a way to make it work for you? Let us feel the vibe…

This has been a Red Eye…